compete technical overview of why we build cafe racers the way we do.

Motocyle B starts at the same 195 kg and 70hp. but the owner decides to remove 15kg of weight from the bike instead.. therefore the owner now has a bike that weighs ( X1 ) 180kg but still has the same 70 hp.

What would you expect the effect to be?
let me explain………the owner of motorcycle A will go a little faster but will steer and brake the same. The owner of motorcycle B will go a little bit faster but the bike will steer and handle better aswell. The message is clear, save weight and you go a bit faster with the free bonus of steering and handling improvements. How much you say? Well we can make the calculation to compare the equivalent HP gain by shedding those 15 kilos…

it works like this: we know that motorcycle A has added 10 horsepower. was it worth it?

(NW ) 75.88 – 70( Y ) = 5,88 Eqivalent hp gain.
So the owner of motorcycle B has gained the equivalent of about 6 hp by removing or changing items. No expensive engine changes. Remember however the motorcycle now also steers better and brakes better for free.

Which parts should you change will give you the most effective weight loss? For that we need to see how weight affects a motorcycle…. tune in next time ….

What effect does unsprung mass have on the motorcycle?
This is the mass that the suspension is constantly trying to keep in stable contact with the road. The suspension is compressing and rebounding in a constant battle and the more mass it has to battle with the slower the overall mass reacts to say a bump in the road. A motorcycle benefits from a lower unsprung mass because it allows the suspension to react faster to any bumps and keep the unsprung mass in contact with the road more often. This gives the rider confidence because the bike will react and moves as expected and desired . In addition the wheels and brake disks require power to not only move forwards but also to rotate. This creates a gyroscopic force that keeps the bike stable in a straight line. So more wheel weight gives more stability, but as we have already seen we want to reduce weight, so clearly a balance must be struck. The front wheel weight is even more important than the rear because it is responsible for steering the bike. Steering happens because the wheels is moved off the centre line. Less rotating mass means the gyroscopic forces are less and the wheel has a lower moment of inertia.
The further away the un sprung mass is from the centre of gravity the more effect it will have so those parts should be looked at first. then you can start to move closer to the centre.

lets start with the wheels…
Modern superbikes have the lightest wheels that the manufacturer can make on a reasonable budget. However cafe racers are based on a more classic style and therefore the base bikes have a different design intent and thus they dont have super light wheels fitted by the factory. The sportser for example is not a track day monster that is built for 1.40 around Jerez. It is however full of character and at its heart is a great bullet proof engine that packs a punch. The standard wheels then are not superlight magnesium or aluminium spoked rims. Therefore when you do put lighter wheels on a bike like the sportster you can begin to see the potential that the motor has to deliver an exciting ride.
A standard sportster 883R weighs in at 265kg compared to 199kg for a Yamaha R1 for example. You can already guess that there is room for improvement but lets stick with the wheels for now. Sporster 883R wheels combined weight is 15kg. A set of Kineo rims weigh 10Kg. A set of BST carbon fibre rims weigh an astonishing 5kg

whats next?
Well you can install lighter brake calipers and rotors ( take a look at the next section ), then you can install a lightened rear swing arm. Tires are often not considered as a weight saving opportunity but their weight is a crucial part of a tire manufacturers design intent.
The fork legs are considered part of the unsprung weight although other parts of the fork are classed as hybrid weight. A factrory 883R the forks are of a more traditional design so they have heavier fork legs. If you change them for more modern upside down forks you are in effect changing the majority of the fork weight from unpsrung to sprung. Overall we might not change the fork weight but we can change the way it affects the handling of the bike. The larger diameter of the upside down forks also provide greater stiffness.

POWERFUL BRAKES..
Uprating the brakes is a major part of the cafe racer philosophy. Dual calipers and disks should be your goal and if you want the best possible braking performance then look no further than the current crop of superbikes… they are fitted with radial calipers, huge disks and now ABS systems…

How do we bring that technology to a sportster from Harley Davidson?
The 883R has dual disks fitted as standard so the first option options we have available to us is to change the brake disks and the pad material. There are many manufacturers of brake disks that will fit the sportster and one of the obvious ways to get better braking is to increase the diameter of the disk. We can provide a kit that increase the size of the disk to 320mm but this will affect the operation of a standard ABS system. The diameter of the standard disk is a great starting point though so if you were to change them for the same size Galfer Wave® then you will feel the difference immediately.

Galfer also do a wide range of brake pads that you can choose from to suit the kind of riding you like to do. Their semi metallic organic pads are designed as a workhorse that are long lasting with little wear on the disk but still give a good feel They also make kevlar pads which provide a lot of fade free power and are especially good in dry conditions. Sintered pads are designed to cope with moderately aggressive street riding and can withstand the high tempuratures of hard use and you can choose different compounds to suit trackdays or street

The next step to consider is the caliper. Any reduction in weight is the main priority. Brembo make a set of axial calipers especially for sportsters that fit direclty onto the bike. These are lighter than the standard axial calipers and are slightly stiffer due to the billet aluminium construction compared to cast. Braking performance is improved but you can go a little further.
Radial calipers offer the route to greater stiffness which improves the mechanical action of the pad on the disk but you will have add an adpator to fit to the forks. 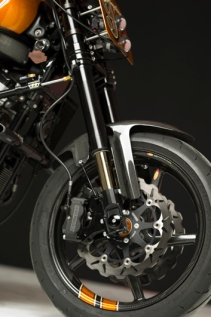 new set of forks that allow you to bolt on radial calipers and big disks straight away. The increase in torsional stifness and the improvement in the leading edge of the pad position in a monoblock radial caliper improves feel , power and will satisfy even the most demanding fast rider. On our top of the range Sportster kit we fit Ohlins FG424 forks with Brembo GP4RX calipers. this combination provides second to none handling and braking performance.
Do not overlook your brake fluid. DOT 4 and 5 are hydroscopic fluids which means they absorb water. Water in the fluid will reduce its boiling temperature and can allow oxidation in the braking system that can destroy vital parts. Change the fluid regularly and only top up in an emergency.

Braided brake lines are a vital part of our performance upgrade philosophy. Not only do they improve the look of the bike they also improve braking feel and power. Braided lines are much stronger than the standard rubber hoses. this means that they dont swell under pressure, transfering maximum fluid pressure to where it is required , at the pad. They also prevent fade over time for the same reason. Rubber hoses tend to lose their ability to return to their origninal shape after repeated use so they must be replaced regularly if you want to maintain that confidence inspiring sense of feel and power. We offer an 883R brake upgrade kit which includes everything you need to change your standard rubber hoses to braided hoses from Goodridge.

TYRES ………… where the rubber meets the road….
Clearly there are many tyre manufactrures competing for customers and even more types of tyre that you can fit to your bike. As we saw when looking at brake pads a lot despends

RIDING POSITION …. clipons baby, countersteering is easier with clipons, and you will have more control as your weight is lower and further forward

MORE POWER ……….. after you have all the above then add HP sauce….